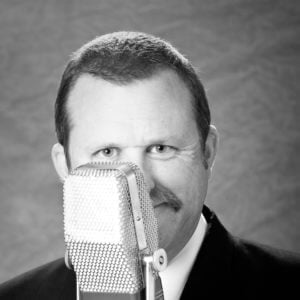 "Brian has often said, It all started at Disneyland. While visiting that magical park, Brian was introduced to Adventure Thru Inner Space (a long since extinct attraction). The narration soundtrack of that ride was performed by the immensely talented voice actor Paul Frees. The dramatic intensity of that performance impressed Brian. He was hooked.

Brian began a lifelong journey to learn more about the craft of voice acting. While other kids were planted in front of the TV, Brian was listening to rebroadcasts of old radio dramas on a local station. With a great deal of respect and admiration, Brian was influenced by the incredible voice actors of the Golden Age of Radio. Talents like Paul Frees, Daws Butler, June Forey, Thurl Ravenscroft, Paul Winchell, Elenor Audley and Mel Blanc remain to be Brian's inspirations.

Brian made the decision to follow his bliss and attended the prestigious voice acting academy Voicetrax in San Francisco. There, he learned the skills to become a professional voice actor. He was signed by the STARS agency in San Francisco and has been doing what he loves for a living ever since. Fulfilling the circle of life Brian is now an instructor at Voicetrax and a voice over coach for Global Voice Acting Academy. He enjoys mentoring and molding the newest generation of voice actors.

With an impressive vocal range, Brian had brought vocal life to all manner of characters. From sinister to silly, Brian can be heard in over 200 video game titles, voicing hundreds of characters. He enjoys all roles that come his way, but has always been partial to the villains. â€œThe bad guys always have the best lines, and you can get away with so much playing the characters with no morals, Brian says.

Brian is honored to have contributed his talents to some great projects. His titles include Diablo III, The Walking Dead, League of Legends, Sam and Max, Tales of Monkey Island, The Wolf Among Us, Skylanders and scores more.

Brian has never had any aspirations to act on camera or stage. I am a voice guy, says Brian. The acting craft has many different disciplines. Voice over has always been my focus. It has special challenges all it's own. After all, what does a raised eyebrow SOUND like.