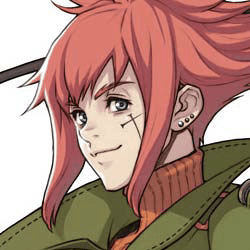 Image: The straight man to Morte’s insanity, like Paul Rudd in Clueless
tries to be suave, like Gideon Emery (Balthier) in Final Fantasy 12

Tone: Sarcastic and glib, but generally a good, sensible guy
disgusted with the tyranny of the ferals, biased against them
the voice of reason, but ineffective at holding Morte back
acts as a sort of protective older brother fi gure to Kyrie
diffuses tense or dangerous situations with a witty one-liner
committed to helping his friends, even at great personal expense

Bio: Another Sand Tribe native, Morte has been dragging him into trouble all her life. A childhood betrayal by a feral friend solidified a strong hatred and distrust for their kind. He joined the Golden Lions with Morte to help fight to free humans from the tyranny of the ferals but chose to remain in the organization even after she left to pursue a more radical agenda. He still keeps tabs on his old friend, though, and goes out of his way to help her when he hears that she’s been put in a feral prison. Though his efforts to help earn him no thanks and a whole lot of grief, he persists nonetheless out of dedication to his friend and a strong sense of what’s right. He joins Kyrie and Morte on their journey more to dissuade them than to help, but gradually, grudgingly comes to accept that the current world must be replaced, not repaired.

Scene 1: Agan attempts to make a grand entrance, but overdoes it as usual. Also as usual, no one takes him seriously.

Vice-Leader of the Golden Lions, ally to humankind, at your service.

I’m Agan the Green
…and Red!

Scene 2: He braves danger to rescue Morte from prison only to find her already on her way out with Kyrie. In her usual pushy way, she ropes him into giving them a ride and joining her cause. He tries to protest, but she walks out on him mid-sentence, knowing she has him beat.

Wait, wait. I just came here to save your neck. I’m not helping you go–

Note to self: next time,
leave her to hang…

Scene 3: Agan attempts to play it cool while being tortured by his feral captors. He hasn’t lost his sarcasm, and his hatred of ferals comes across though the pain and ragged breath.

Scene 4: After defeating Rana Rex, who was using humans as fertilizer to feed his garden, the dying frog aristocrat pines for his flowers. Agan is as furious as he gets and spits this
final line to the inhuman feral aristocrat.

I hope they choke on your
filthy blood, froggo.

And if they don’t, you
better believe I’ll be
back to torch this place.