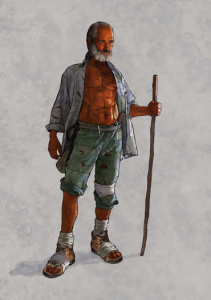 Dr. Sayrus was a brilliant though controversial physicist, born to wealthy parents in Greece but educated in the States; attended MIT in the 60’s, worked on several black projects for DARPA (Defense Advanced Research and Prototyping Agency) and JPL during the 70’s, then eventually settled at Stanford as a physics professor. Although highly respected in his early career, his theory of “temporal vortexes” made him, at best, an eccentric, a madman at worst.

From out of one of the huts emerges an old man with long,straggly white hair and a rough beard, his skin tanned a dark brown, clothes stitched together and repaired countless times. He speaks in a vaguely Greek accent.

DR. SAYRUS
Sorry, I think you have the wrong
castaways. You are Mr. Dylan, I
presume…?

DYLAN
(shaking hands)
At your service. And you are?

DR. SAYRUS
Dr. James Sayrus. My humblest
apologies for dragging you into
this, but I think for the sake of human civilization, it was a fortunate accident.

Dylan looks at the man suspiciously, takes a couple steps back.

DYLAN
Yeah, yeah, okay, I get the point.
Where’s Rock? He said he was here?

DR. SAYRUS
He went out looking for you… and
my daughter. I don’t suppose you’ve seen her–?
Dylan shakes his head no. The disappointment is plain on the Doctor’s face.

Dylan twirls his fingers like a cyclone, makes sound effects with his mouth, mimicking the time vortex.

DR. SAYRUS
Yes. The temporal vortex. It was the same for me and my crew, God rest their souls. Those that didn’t perish in the storm were
taken, one by one, by the beasts out there. The few of us that made it here alive all died trying to retrieve the TVE…12.