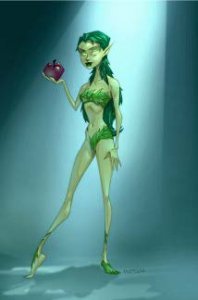 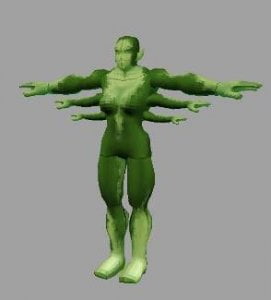 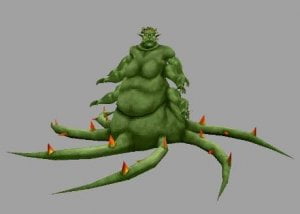 The main antagonist of the story is a Dryad (a wild force of nature who’s bound to a tree, aka forest nymph), bends the balance of nature with viral magic and prevents the natural occurrence of death. All of her life she has always wanted to be evil, but everything she sets out to do turns out to be good. Frustrated by her endless attempts she tries an off-the-shelf product to get in touch with her inner evil. However this product requires hibernation in a cocoon.
At the beginning of our story she is encased in her evil cocoon growing in mass and concentrating her evilness. She is prematurely awoken by two meddling kids, guess who, and now with the aid of this product she is trying to achieve her pinnacle of evilness. Her goal is to consume the life force of the people of the world to finish her transformation into… the picture on the box.

Physical Description:
When we are first introduced to Furi she is small and waif-like, or better yet she is puny. As she steals and collects life she grows in mass and evilness. She has three different physical states throughout the game, Waif, She Hulk, and Orca. Since she is a villain she will have a wide range of emotional states and tone inflictions in her voice. Although her physical appearance will change drastically, her voice will only undergo minor intonation changes.

Audition Lines:
Calm, talking to herself: “I need some minions, stat.” (Waif)
Questioning, getting weaker, tired: “Uuuuugghhh. What’s that smell????? Sapping.. will.. to.. live.” (orca)
Angry: “Stomping time!” (She Hulk)
Annoyed: “AAHHH! I just grew that. I don’t have time for this!” (Waif)
Pissed off to the point of screaming, then into self pity: “Shut up! Shut up, shut up, shut up!!!! What would you know about it? Trouble comes so easily for you, both of you! You don’t even have to try…” (Orca)
Taunting while in a fight: “I’ll add you to my compost heap!” (Orca)