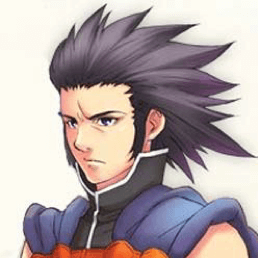 Image: hot-headed, with a chip on his shoulder like Dante Basco (Zuko) in Avatar
condescending like Jason Isaacs (Lucius Malfoy) in Harry Potter

Traits: Son of Lupus Rex, one of the feral nobles his racist belief in the superiority of ferals leads to overconfidence feels all humans are terrorists, and should be wiped out takes the bait at the first sign of provocation remains haughty, despite continually losing

Bio: Rajiv enjoys a position of leadership and control within the Salvation Committee, thanks to his father’s status. He spends his time hounding the World Annihilation Front (as much to avenge his progressively more bruised ego as to stop them), disregarding Naja’s well-reasoned strategic advice in favor of butting heads with the obviously stronger Morte. He refuses to acknowledge that the world’s feral rulers are wrong to treat humans as expendable slaves, and sees Kyrie and company as upstartish terrorists who need to be crushed to prove a point. He has a sadistic streak, and enjoys torturing human prisoners. His temper and stubbornness ultimately see him killed at Morte’s hand.

Scene 1: The game opens with Rajiv addressing his troops, reacting to the World Annihilation Front’s announcement that it will march onViteau, the ferals’ capital.

More conceit from this scum calling itself the World Annihilation Front!

In the name of the Salvation Committee, they shall be taught.

They will see who are the masters and who the lowly serfs!

Scene 2: Despite plenty of practice, Rajiv never learns to accept defeat or admit to his
own shortcomings.

R-ridiculous! Humans are slow and feeble! This outcome defies nature!

Scene 3: Even when bested, his confidence never flags, and he’s quick to make threats he
obviously can’t back up.

Rgh! You were lucky. Any other day and you’d be
long dead by now!

Enjoy another day alive, but know that I will see you dead tomorrow!

Scene 4: As Rajiv sadistically tortures Agan, Naja warns him to go easy before he’s beating a lifeless body. Rajiv brushes him off casually.

Beating his corpse sounds fine by me. Besides, I’ve got clearance to kill him.

Not that I’d let him off the hook that easily.