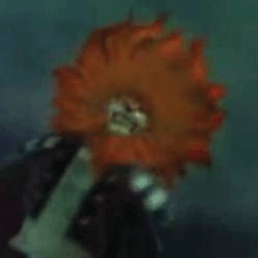 Image: booming, but fatherly, like James Earl Jones in The Lion King wise and compassionate, like Gregory Peck in To Kill A Mockingbird

Tone: a potent force of nature, but fatherly and sympathetic to Kyrie

Traits: the physical incarnation of fi re in the world one of four Primes that govern the balance of the elements responsible for overseeing the beginning and end of the world cares about Kyrie beyond just his role in the end of the world gives Morte control over Kyrie’s power, freeing him from his fear

Bio: While the other three Primes are simple boss monsters who exist to test Kyrie’s worth before giving him their power, the Crimson Son plays a much more direct role in preparing him to face his destiny. First, in the guise of Kyrie’s Uncle Agni, he raises the boy in a remote village, instilling in him a kind and loving heart that later allows Kyrie to rise above his identity as an inhuman system of destruction to love and protect Morte. Later, as the Crimson Sun, he grants the deceased Kyrie human form again, along with all his powers. In his final moments before being absorbed by Kyrie, he leaves control of the Destruct Code, used to activate Kyrie’s destructive power, to Morte, effectively freeing the boy from its bonds and the fear that his power may be used by someone else for their own gain against his will.

Scene 1: When Kyrie meets the Crimson Sun in his true form, he explains that he does not wish to fulfill his role as the Destruct. The Crimson Sun replies that that is impossible.

You speak in paradoxes. The Destruct Destroys. That is your nature.

You are he who will end the world. No more, and no less. So it must be.

Scene 2: Kyrie protests, and the Crimson Sun realizes the cause of his conflict. Partly responsible himself for instilling emotions in the child he watched over, he offers sincere pity.

Joy and sadness can only muddy your vision. You’ve
drunk too deep of them.

Scene 3: Morte speaks to the ball of energy that Kyrie has become, entreating it to return to
human form again. The Crimson Sun sees Kyrie respond, and understands their bond and Kyrie’s hesitance in coming back.

Ahh, I see… So the cause lies in you.

Then perhaps you ought to be the one to bear the Destruct Code.

He didn’t respond to my call, but…

…All our hope rests on his response.