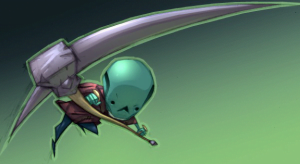 Death, Jr is an ordinary kid on the inside and doesn’t understand that he’s different. He has asthma, yeah, but his dad goes to work just like all the other kids’ dads, only his dad happens to be the Grim Reaper. He is the extraordinary placed in very normal situations.

A walking dichotomy, he’s positive, upbeat, fairly normal kid that everyone would really like if he weren’t the son of Death. He loves his parents and friends and looks up to his dad. He doesn’t TRY to stand out, and he doesn’t yearn to be normal. He’s a bit oblivious to it all. Sort of Edward Scissorhands, but with loving parents. Buzzwords: Closet hero “doesn’t know his own strength within”, Responsible, Upbeat, Innocent, Eager, Destined for Greatness, Nimble, Natural Fighter.

Physical Description:
He is limber, coordinated, and self-possessed. Not particularly strong, and unusually lithe, DJ has nothing to weigh him down; his actions are quick and flea-like. He’s a precision guy, not a
brawler.

Sounds Like:
“Every kid,” generic teen voice. Possible with a slight crack in his voice due to the first blossoming of puberty. Mainly looking for acting quality and identify-ability in DJ’s voice. Major Influences for DJ: Charlie Brown or Linus or Schroeder from the first Peanuts Christmas special as an influence for DJ’s VO.

Inflection: Worried
Quote: “Huh? Oh no. What if my Dad finds out? I’m still grounded from
LAST week. And I can’t lie to him, he can always tell.”

Inflection: Defiant
Quote: “We don’t WANT to be evil. No one WANTS to be evil.”

Inflection: Kid trying to explain but too excited.
Quote: “Dad… you’re free! Nothing. I mean, it’s not what it… I uh. It’s all
my fault. I released the villain and she was draining the souls from
all the people in town, not to mention the whole sucking the river
Styx dry as a bone and then there was that huge tree fortress
and… and, I really screwed up, Dad. I tried to fix it, but… I really
blew it.”

Inflection: Fairly normal, slightly disgusted.
Quote: “Ugh, llama nuggets look gross when you jump on them. I will
never eat another nugget.”

Inflection: Explaining, defensive, slightly embarrassed at the end
Quote: “They need a lot of space. Tons of kids have their toys pass
awa…err break.”

Inflection: Happy, cheery.
Quote: Series of Woo hoos, yippee, etc
Inflection: Normal DJ in banter
Quote: “Thanks for the help Guppy. We can take it from here.”