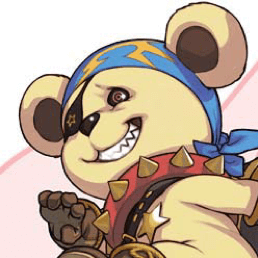 Image: hard-boiled and results-oriented like Clint Eastwood in Dirty Harry
at times so gruff it’s funny, like Bruce Campbell in Army of Darkness

Tone: pulp-noir detective, cool and gruff in contrast to his teddy bear body dedicated to his job as a contract mercenary, he gets the job done he operates by a mercenary code of ethics, the client is always right he acknowledges the world is falling apart, but simply observes it he feels strongly drawn to Kyrie’s simple sense of right and wrong a seasoned warrior, he brings wisdom and experience to the group gruff to everyone but his gigantic pink sweetheart, Muffy

Bio: As a contract bodyguard for pleasure cruise owner and all-around bon viveur Felis Rex, he first meets Morte and Kyrie as an opponent, easily subduing them when Morte attempts to hijack the cat’s ship. When he is then charged with accompanying them on an errand for Felis Rex, he readily agrees to fight alongside them—his clash with them had been strictly business, and he asks that they bear him no hard feelings. On his travels with them, he sees that Kyrie can’t stand by and watch others suffer, can’t let a promise go unfulfilled, and always puts others above himself, traits Taupy respects as befitting a real man. Fascinated with the timid boy, Taupy decides to tag along and see where Kyrie’s fate leads him.

Scene 1: While on a mission to a swamp, the party is attacked (improbably) by a whale monster.
With the same dry, straightforward delivery as Ash from Army of Darkness, he quips:

Who ever heard of awhale in a swamp? Time to die.

Scene 2: Taupy explains to Kyrie why no one will stop Porcus Rex from eating a boy he ran into on the street. His tone is dispassionate, as if to say, “It ain’t pretty, but this’s how it is.”

Brutalizing a defenseless child’s about as low as a man can get.

But when that man’s one of the noble beasts, nobody’s got the balls to stop him.

Scene 3: Taken by Kyrie, Taupy takes on a sort of mentor role for the boy, explaining the
realities of the world while also encouraging him to stay true to himself.

Scene 4: While briefly laying low at Taupy’s house, the party meets his towering lover, Muffy,
who smothers him with a greeting worthy of Miss Piggy. When she notices the party, she offers a sheepish apology, but Taupy assures her she could never embarrass him.

Nothing to be ashamed of about our love, kitten.

You’re a class act. I’d parade you around on my
shoulders if I could.