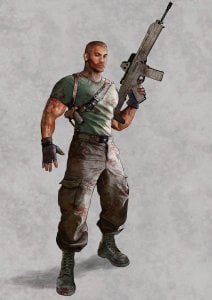 Craig Dylan
Age: Mid 30’s Occupation: “Senior Security Advisor for Arconite Security” – mercenary Dylan is a senior security advisor for Arconite Security. If you ask Dylan himself, he’ll tell you straight out that he’s a mercenary, no matter what his corporate handlers print on his business card and pay slip, except now he carries a black AmEx card with is real name printed on it, and sometimes he has to wear a suit to meetings. Sometimes.

Dylan is a former CIA spook that got screwed-over one too many times by the boys at Langley, so he left the Agency in the late 90s and hasn’t collected a government paycheck since. He drifted from one shitty corner of the world to another for a few years, offering his services to a number of “private security contractors” and banana republic dictators, doing untold damage to his body and karma alike. He was quite happy to ride this downward spiral all the way to the bottom, drinking too much, taking jobs no one in their right mind would take simply to increase the chance that some day he wouldn’t come back. Dylan had seen too much, done too much, and didn’t like what he saw when he closed his eyes at night. A chance meeting with Armando “Rock” DePiedra in a shanty-town cantina outside Bogotá changed that. 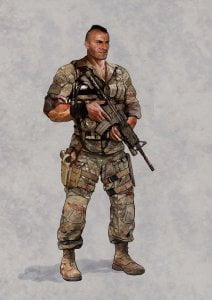 Armando “Rock” DePiedra
Age: Late 30’s / Late 50’s Occupation: Founder of Arconite Security Armando “Rock” DePiedra grew up living out of cardboard boxes and half-unpacked suitcases thanks to his father’s career in Navy Intelligence. A text-book Navy brat, he’s attended more schools in foreign countries than most people will ever visit in their entire lifetime. As a result, he has a gift for languages and can make himself at home in virtually any country, any culture, anywhere in the world. Although he briefly entertained an idea of going to a normal university and leading a “normal” life (he thought about becoming a history teacher), somehow the gravity of the U.S. Navy was too great, and he was soon following his father’s footsteps. First Annapolis, then SEAL training in Coronado, then it was off to various godforsaken corners of the world to conduct missions few would ever hear about.

Audition Lines:
EXT. JUNGLE – DAY
Dylan is walking through the jungle when he encounters another mini TIME VORTEX. This time he’s ready for it.

Dylan takes some shelter and un-clips the radio.

DYLAN
Rock? Are you there, buddy? Over.
ROCK
Reading you load and clear, Dylan.
Over.

DYLAN
What gives with these storms, man?
They’re starting to get on my
nerves.

ROCK
Temporal vortex. This whole island
is being sucked up into a time
storm, along with everything on it,
including radio waves. It’s why we
were able to intercept the signals
from the lost expedition.

DYLAN
Yeah, speaking of which… What
gives with the plane wreckage? It
looks like it’s been stuck in the
jungle for decades. How long have
we been here?

ROCK
(long pause)
Uh, yeah… we’ll have to discuss
that when you get here. It’s…
complicated. Where are you,
anyway?

DYLAN
About ten clicks south of you, near
a big waterfall.

ROCK
The falls… right. Okay, I’ve
stashed some equipment for you that
you might find useful. Follow the
river north until you come to an
old flying fortress. Goodies are
inside. You’re gonna need them.
The time vortex begins to subside, and the radio signal degrades.

DYLAN
Hey, Rock… if I don’t make it
back…

DYLAN
Rock, a dinosaur tried to EAT ME.
ROCK(through heavy static)
…never quit on me, and I’m not
gonna quit on you. ¿Entiende,
hermano?