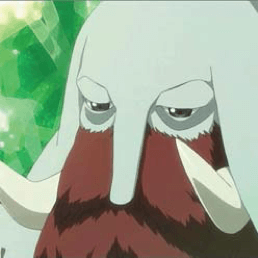 Tone: Fatherly and warm, genuinely concerned with others’ well-being

Traits: Highly skilled physician, able to cure any ailment
unable to abide by others suffering around him
runs a hospital that treats human and feral patients alike
one of the few feral nobles who doesn’t view humans with disdain
treats even wanted, dangerous criminals if they need his help

Bio: Elephas Rex runs a free clinic where people of any race, creed, or origin can receive the benefit of his medical talents. He maintains that every patient is equal in his eyes, despite the fact that his clemency towards humans has made him an outcast among the other feral nobles. At one point, he saves Morte’s life from Anguis Rex’s deadly curse, despite knowing who she is and what she hopes to accomplish. Rather than preach at her, he tries to show Kyrie how beautiful the world and people can be, inspires him to treasure Morte and his love for her, and encourages him to emerge from her shadow and decide for himself how he feels about the prospect of destroying this world. When that ultimately fails to dissuade Kyrie, he feels he has no choice but to resort to violence and tries to stop the party by force.

Scene 1: When Morte is carried into his clinic on
death’s doorstep, he hurries to treat her,
no questions asked. After saving her, he
reveals that he knew her identity all along.

The sick are my patients,
be they feral, human, or
wanted criminals.

Such is the nature of my
work as a doctor.

Scene 2: He takes Kyrie aside, unable to understand why such a kind person would want to end the world and tries to dissuade him.

Our world is beautiful.
Lush verdure, nurtured by the loving sun,
caressed by the gentle breeze…

I love this world, Kyrie. Dearly. I wish I could protect it from harm.

Scene 3: When Morte and company attempt to revive the deceased Kyrie and continue their quest to end the world, he begs them to stop.

Please, I entreat you to reconsider this madness.
He gave his life up freely to save this world.
He made that choice for you. He agonized and fret and gave his life for you!

Scene 4: Left with no other choice, he tries to stop the party from reviving Kyrie by force.

I had wished to resolve this through any means but violence. However…!
I feel for your loss, but you must let Kyrie go, for the sake of the world!