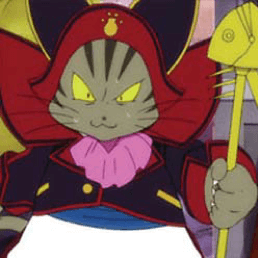 Image: weasely and slick, like Walter Catlett (Honest John) in Pinocchio prim and prissy, like David Hyde Pierce on Frasier

Traits: avid collector of rare objects and treasures, pleasure cruise captain
removed from politics and apart from the other feral nobles
treats everyone equally, provided they have money/are of use to him
uses and extorts others to get what he wants, but rewards them fairly
absolutely loyal to Rhi’a, but otherwise motivated by self-interest

Bio: As captain of the Zifnir, Felis Rex offers a pleasure cruise with every amenity, provided passengers have the cash to pay their way. He is perfectly happy to take on stowaways—wanted criminals, at that—if they can fetch him a few heavily-guarded baubles in return. His motto is quid pro quo, and Rhi’a is the only person he truly cares about other than himself. Though money speaks where Felis Rex is concerned, and he is a devoted hedonist, he is always extremely courteous to others (though this often comes off as affected). He’ll happily extort people for his own material gain, but he is not a fi ghter, and will go out of his way to favor diplomacy over violence. In short, he’s a weasel, but he’s not a bad guy.

Scene 1: After foiling Morte’s plot to hijack his ship, he turns around and offers her a job.

I’d like to ask you to do a few jobs for me, given your…proficiencies.

Just a few simple errands, really. I’m quite sure you can handle the task.

Scene 2: When Morte balks at his offer and asks what he would say if she declined, he offers a matter-of-fact response, dripping in false apology—business as usual for Felis Rex.

Then I would regretfully have to deliver you to the authorities. Dead.

Scene 3: When Kyrie and company deliver the plant he requested (akin to catnip), he wastes no time in huffi ng it, and indulging in a quick euphoric trip before catching himself.

Mmmnh! Delightful! Oooh, it’s been too long. Did you miss me too, hmm?

Er–AHEM! Pardon me. I got a little caught up in the moment there.

Scene 4: When Rajiv threatens Rhi’a aboard Felix Rex’s ship, the cat becomes uncommonly
serious, baring his claws at the wolf.

I will not allow you to harm Lady Rhi’a!