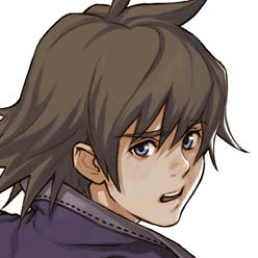 Image: timid like Haley Joel Osment in The Sixth Sense
naïve and polite like Brendan Fraser in Blast From the Past

Traits: wishy-washy at fi rst, then more fi rm and resolved naïve and sheltered due to rural upbringing shy and submissive, but a romantic at heart pacifistic and anxious to keep the peace and not make waves unwilling tool of destruction, confused by his own power strong sense of justice and unable to break a promise

Bio: Raised as an orphan by his uncle in a tiny village in the hinterlands, Kyrie grew up in a quiet world of everyday routine. When a mysterious power within him awakens without his knowledge or control and reduces that town to barren sand, he’s left alone, distraught, and confused. He meets up with the fiery tomboy Morte and clings to her, taking comfort in her strength and sense of direction. His love for the domineering warrior gal grows, but meanwhile, she sees him only as a means to her desired end—the end of the entire world. Over the course of their adventures, he learns that fighting is sometimes the right thing to do, and that, like it or not, his power is an inextricable part of who he is.

Scene 1: Early in their relationship, Kyrie is quick to apologize for everything to Morte, even when he doesn’t really know what he’s apologizing for. He means it sincerely, though, honestly believing the failure must have been his. Here, he’s doleful and self-effacing like Eeyore from Winnie the Pooh.

Scene 2: The usually passive Kyrie jumps in without thinking when he sees the gluttonous tyrant
Porcus Rex about to eat a small human boy as punishment for bumping into him. Kyrie
begs for the boy’s life in the most accommodating way he can think of.

Scene 3: Doctor and dedicated pacifist Elephas Rex entreats Kyrie to reconsider his involvement
with the World Annihilation Front. He knows that Kyrie is in love with Morte, and tries to show him that ending the world means an end to that love. Elephas Rex asks that Kyrie think about what he really wants.

What I want…? We’ve been so busy, I never really stopped to think about it.

Scene 4: Later in the game, he faces the tyrannical leaders of the current, broken world and declares to them that he won’t back down any more.

We’re not going to stop. We’re ready to do what it takes to change the world.