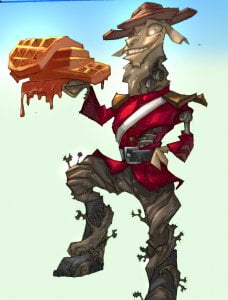 Louie is the mascot of the World of Waffles franchise, Louie the Royal Mounted Llama. He is dressed in the garb of a Royal Mounted Police officer. He has a huge grin on his face. Normally, he would delight kids and incite laughter and glee, now, only pain and death are offered.

Physical Description:
Louie is a huge animatronic mascot on a Lazy Suzan on top of a building, the bottom and the top of him can rotate in two different directions. His torso can spin while the head is turning to look at the player constantly. At his feet is a mass of tangled roots, this is the Dryad taking control of the animatronic mascot. In his right hand, Louie is holding a stack of waffles that he will use as a weapon.
Louie sounds calm and friendly all of the time regardless of what he is saying, upbeat, cheery, doesn’t know that he is doing bad. Never sounds angry, but as he becomes more damages his voice skips, becomes more robotic and less human-like.

Audition Lines:
Happy Mascot, creepy: “Everyone has a good time at World of Waffles! Ha ha ha.”
Questioning mascot, not whiney: “Why won’t you let me have fun with you?”
Slowing down, taking damage: “Llama, it’s what’s foooorrrrr luuunch.”
Statement while fighting, not angry, still upbeat and too happy: “Waffles, the other white meat.”
Loudspeaker (mascot type voice): (sing songy) Hiya kids, put a smile on your face! It is your hunger we want to erase. Everyone has a good time at World of Waffles!
Loudspeaker (mascot type voice): (Menacingly) You better smile, or you will piss me off!
(As player moves along wire towards Louie’s mouth): Mmm, come join the fuuuuunnnnnn!