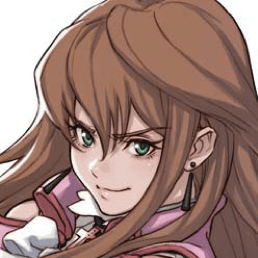 Tone: impatient, leap-before-you-look, my way or the highway

Traits: absolutely sure that destroying the world is the only solution
incredibly strong and happy to use violence to get her way
not a bad person, but not bothered by people thinking she is
very goal-oriented and frustrated easily by setbacks and detours
keeps her emotions (other than anger) locked up inside
has no problem using Kyrie or Agan, but isn’t malicious about it

Bio: She grew up strong and self-reliant as a child of the nomadic Sand Tribe, and eventually joined the Golden Lions, a sort of underground Human Liberation Front that worked to free humans from the tyrrany of the ferals. She later left their organization, feeling that their methods were too moderate, and that their dream of equal coexistence with ferals was impossible. Now, she acts as the driving force of the World Annihilation Front, absolutely committed to her goal of destroying the world in order to stop all the atrocities happening within it. While her ironclad determination isn’t the result of long thought or any real self-questioning, she’s willing to do whatever it takes to follow through on her gut instinct.

Scene 1: Morte makes her grand entrance, bombs a-blasting, telling the armed forces of the oppressive feral regime of why she’s there.

Your friendly neighborhood World Annihilation Front agent, at your service!

This ugly world’s overdue for ending, so I’m here to blow it up real pretty!

Scene 2: She springs Kyrie from prison after hearing that his power may hold the key to ending
the world, but is disappointed to find that he’s actually a timid, gentle Mr. Nice Guy. She then wastes no time in venting that frustration on Kyrie.

You’ve got the power to end the entire world, and you’re a HUGE PANSY?!

Scene 3: When Kyrie sacrifices his life to save Morte and the rest of the world, Morte becomes
uncharacteristically depressed. Once she hears he can be brought back, her energy returns and she gets to the task at hand. As she’s reviving him, she lets down her guard
for just a minute, showing an emotional, vulnerable side.

…I want you back, Kyrie. Want you here with me now. I want to hear your voice.

Come back to me….

Scene 4: Ultimately, upon learning that they’ll have to kill God herself to create the new world
they desire, Morte is completely unfazed and matter-of-fact about the task ahead.

Well, that’s how it is. Guess it’s time for the old god to move along.