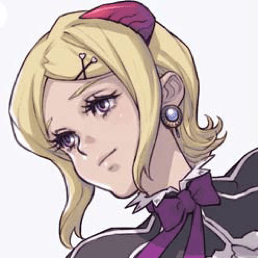 Tone: childlike and simple or wise and cryptic at turns, terse

Traits: her ability to see the future makes her fatalistic and resigned
despite that sadness, her natural personality is bright and upbeat
very blunt and plain-spoken, even harsh, but never malicious or nasty
views facilitating Kyrie’s quest as her duty as the last living dragon
able to call upon the knowledge of her dragon ancestors

Bio: As the last scion of the Dragon race, Rhi’a carries within her fragments of the collective memory of all dragons before her since the beginning of time, and the ability to catch glimpses of the future. When she taps into that knowledge, she enters a trance state, and speaks with a less cryptic, more authoritative voice. On a personal level, her vast knowledge has made her both resigned about the fate of the world and tremendously bored with her life. She feels bound by her familial destiny to watch over the Destruct (Kyrie) and help usher in the world’s end, but also has a deep personal desire for the stimulus and joy found in surprises. Luckily for her, Morte is at the helm of this crew, ensuring that their trajectory towards the world’s destruction will be anything but predictable.

Scene 1: When first meeting Kyrie, she sizes him up, knowing instinctively who and what he is. When she sees he has emotions that will hinder him as the world-destroyer, she expresses pity and sadness, though her cryptic words leave Kyrie completely confused.

Scene 2: When confronted by Rajiv, a wolf feral in the oppressive government’s military forces,
she coolly and completely dismisses him, provoking him into a blind rage.

Scene 3: Given the knowledge that Kyrie’s fate is to end the world, Rhi’a is confused by his
continued resistance to fulfi lling that role. She understands his reasons, but not why he would feel the way he does.

I know why he’s feeling conflicted, but…

Scene 4: Tapping into her ancestral knowledge, she informs Kyrie from a trance-like state that there is no way to give up his power.

You are the Destruct. As long as you exist, you
exist with that power.

The only escape from that burden lies in the world’s irrevocable end.